Now that we’re well into spring – and can almost… almost!… smell summer, Rachelle humorously rounds up some of the Mother’s Day campaigns she enjoyed from the class of 2017.

Using models instead of Mums

First of all – of course models can also be mothers. Over half of the current Victoria’s Secret line-up are also proud mothers. Adriana Lima, Candice Swanepoel and Lily Aldridge? All mothers who regularly post photographs on social media of their adorable children. However, when it comes down to creating Mother’s Day campaigns with maximum impact it would be refreshing to see a bigger and better variety of “Mums” in all their glorious shapes, sizes and colours used in campaigns. Relatability is a key factor in advertising and it should be a priority from the beginning. A nice antidote to this was intu Braehead’s animated superhero campaign which asked, “What makes your Supermum happy?”. Easily accessible to young children, fun, playful and relatable. Tick. 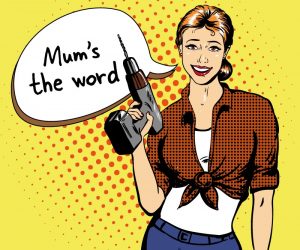 So. Much. Pink. We know, we know – all things feminine and all that. But sometimes it really helps to mix things up. A great campaign that rebels against this (rather surprisingly) was from US brand Telefora. Their television advert revolved around the hashtag #OneToughMother and showed a variety of Mums being remarkable from the small-scale everyday right up to the extraordinary bravery of mother’s working in war zones. All of this, plus using the iconic “What It Takes to Be Number One” speech by Green Bay Packers coach Vince Lombardi over the top of the action, gives the ad an ambitious, bold, and uplifting feel. With Teleflora being founded in 1934, it would be easy to assume that they had run out of ideas about the most predictable gift for this date in the retail calendar, but this advert really manages to pack a punch. Flowers feature only briefly before the advert confirms: “Motherhood isn’t always hearts and roses. But Mother’s Day can be with a bouquet from Teleflora.” A nice twist on what could be a very cliched campaign. Top marks from us.

Go on, have a guess of the top ten gift ideas for Mother’s Day. You probably guessed the same as everyone else (ourselves included!): perfume, flowers, scarves, handbags – the usual paraphernalia. The main problem of using gift guides as part of a campaign? They usually aren’t written with Mums in mind – they’re written with retailers in mind. Instead, they should be by Mums, for Mums, to give those who are buying some genuine and useful advice. One of our partner agency campaigns which worked well gave Mums the chance to comment on what their ideal gift would be. As well as prompting some great ideas, we also had a few humorous responses, such as “peace and quiet for a day!”. We can’t really argue with that one. There’s really only so many pamper bath sets one woman can handle.

A nice off-set even the most hardened cynic would find difficult to criticise. Some companies, including Macy’s, pledged to donate to women’s charities in exchange for your mother’s day gift selection with them. This is something positive we hope more retailers and companies can take up in the future, because it means you can feel a little less guilty splurging on your own mother if you know you’re also helping another woman in need across the globe. Sounds like a win-win to us.

We couldn’t write a Mother’s Day round-up review without bringing back this gem from 2015. Missed it? Two years ago, Penguin tried to celebrate Mother’s Day and engage consumers by asking “Attention Penguins! With #MothersDay fast approaching, we were wondering… what are you getting #YourMum?”. All too predictably the hashtag was hijacked with inappropriate jokes and association with the phrase #YourMum (familiar to anyone who has ever been to a school with other children, at any point of their lives, ever). Was it a genuine mishap or a clever ploy to create social chatter? The jury’s still out on that one. Even if Penguin didn’t manage to boost sales with this simple tweet, they certainly succeeded in boosting engagement. What’s more important is still out for debate, but maybe that’s a blog post for another day…

Mum’s the word… was last modified: February 14th, 2020 by markarma
Menu
We use cookies to ensure you get the best experience on our website. Read More