For this post, Caroline navigates the hashtag minefield…and makes it safely to the other side. Although the same can hardly be said for some of the examples…

Twitter is quickly following Facebook as home of the viral campaign. Say something meaningful that people like – or dislike – and you can become the talk of the twitter-sphere overnight. Hashtags play a large part in this, allowing millions of users to unwittingly come across your place or product by searching for a key term. A term that you have, of course, brilliantly utilised in your recent post or posts.

You may not be able to contain the brand trolls (keyboard gangsters feverishly awaiting the next fail by an unknowing social-media exec) but you can certainly do your research and learn from the unfortunate, and hilarious, mistakes of others.

So here we are; three things to remember when using hashtags…

Mind the gap
Remember the key rule of hashtags: spaces don’t work. Therefore, your witty word wizardry will be run together to make one barely legible phrase. Keep the number of words to a minimum, and always double check that it can’t be misconstrued in any way…

#Susanalbumparty
Poor Susan Boyle’s wholesome album launch received a bit of a seedy following after this.

#goshitsearly
A naïve Sky News correspondent created her own hashtag to document those early morning reporting slots – not toilet trips.

#nowthatchersdead
Although not created by a brand, a classic example of how hashtags can go wrong. Poor Cher had to reassure grieving fans in the US that she was indeed still alive, while the former Prime Minister of the UK was not.

Don’t dive in
It’s ever so tempting to jump on a bandwagon and throw as many trending hashtags into your posts as possible…. But don’t. Twitter is the home of current affairs, and trying to manipulate a hashtag for a serious incident can leave you looking at best insensitive, and at worst a soulless robot, peddling products. Don’t get it? Examples below:

#whyistayed
Di Giorno pizza riled the general twitter population by unknowingly jumping on the back of a domestic abuse campaign.

International affairs
Just because something makes sense in the context of your own language and nationality – don’t forget the masses of English and Spanish users who may see something hilarious that your own native followers don’t.

#powergenitalia
Italy’s leading power provider? Or something else… this went beyond the mishap of a hashtag – it’s currently the company’s website URL. (not quite www.therapistfinder.com, though – Ed)

Sadly the tweet was removed… but search the hashtag now and you’ll find hilarious commentary from witty tweeters from around the globe.

#Hobbitch
The Swiss PR team for the latest instalment of The Lord of the Rings franchise used the above hashtag to promote the movie’s release. Sadly they weren’t being risqué, .ch is the official domain for Switzerland. 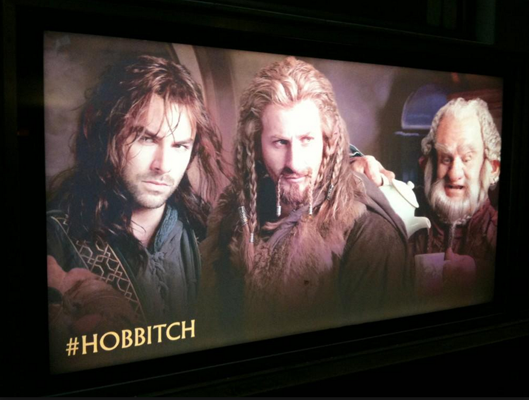 All’s well that ends well – the majority of the guilty parties followed up with apologetic tweets to pacify irate followers. Powergen Italia have even been accused of capitalising on tweeters’ dirty mindedness. The question is – when their tweet went viral did it do more harm than good? We’ll leave that for you to decide.

Hashtag Fail was last modified: December 19th, 2018 by markarma
Menu
We use cookies to ensure you get the best experience on our website. Read More